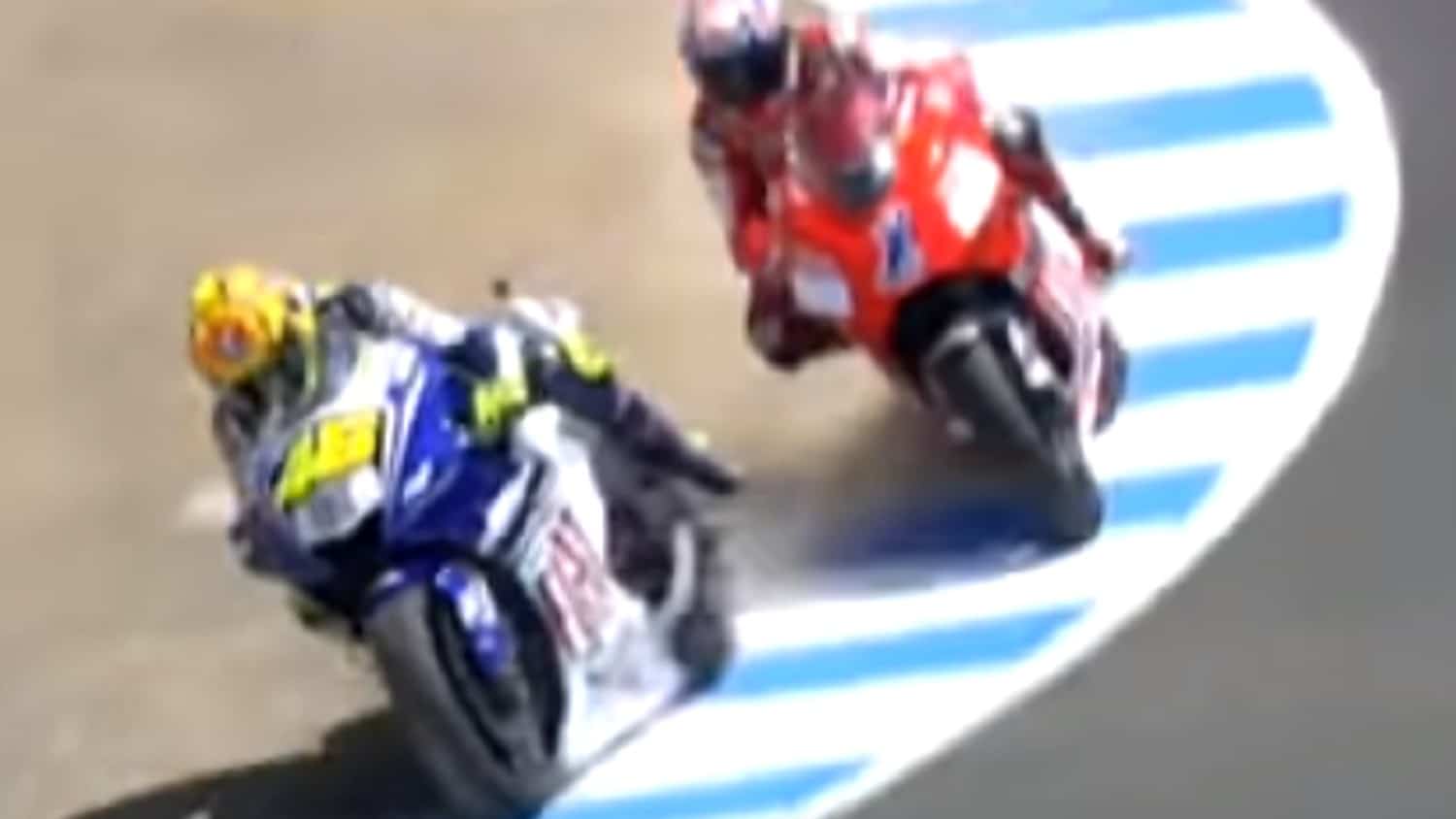 “If I cannot do great things, I can do small things in a fantastic way!” (Martin Luther King Jr.)

With this aphorism Martin Luther King was specifically referring to the excellence in doing any type of things (Doing things right), more than to the choice of the right things to do (Doing the right thing), addressed in the previous post, and this is perfectly coherent with today’s discussion of efficiency.

However, I couldn’t keep from choosing the photo of Valentino who overtakes Stoner at Laguna Seca’s Corkscrew in 2008: I hope you will forgive me, despite the fact that this performance had more to do with effectiveness.

As you know, the same results (market position, brand reputation, financial performance) can be obtained with an infinite number of alternative combinations of resources, tools, and time: which one, among these combinations, allows the optimal cost-benefit ratio?

The concept of efficiency is rather close to that of productivity, which measures, as well, the ratio between outputs (results) and inputs (use of resources, i.e., basically, costs): however, while the former emphasizes the economic aspect and the purpose of “saving” (costs are the ratio’s numerator), the latter focuses on the “technical” ability of a given resource to produce results (the output is the numerator).

For practical purposes, what matters is asking ourselves: other things equal, and considering a given level of results, can I reduce costs, at least in terms of time spent? Or, even better, since I’m more attracted by effectiveness, given a certain amount of costs, can I improve results?

Also in this case, as in any marketing activity, we need to appreciate:

But I guess that you must be terribly impatient to hear about the third and last episode of Gianni and his share story (you can see the previous episodes under Function and Effectiveness): the logical connection with efficiency is rather audacious, but could make sense anyway, since we can estimate market shares in various ways (our objective, that will have an impact on our decisions), and it’s perfectly useless wasting time with incongruous approaches like that initially suggested by Gianni.

Precisely in response to our friend Gianni, we had seen two alternative and relatively more meaningful methods for estimating market share:

En passant, we had taken advantage of the two first episodes to answer the possible objections made by an imaginary “balls breaker” who could try to pick holes in things, obviously without finding them …

How to get sales agents to provide information on clients?

To say the truth, the objection of our balls braker, about the fact that agents who represent multiple brands take great care not to collect the necessary data for estimating shares and, most of all, not to communicate to anybody the available information, was not so peregrine!

How to squeeze relevant information out of this type of agents (who, on the other hand, are normally nice fellows, and often good salesmen and saleswomen)?

In order to solve this arcane mystery, let’s leave alone Gianni and move to another small firm, where we can meet Mr. Fox, the Sales Manager, and Mr. Rossi (not Valentino!), a sales agent.

In practice, we have two possible methods:

This method is normally fast: it consists of firing the agent without notice and immediately re-hiring him or her (provided that he or she is a professional and willing to take up the challenge), i.e. proposing something like that (after the firing or, even better, without resorting to such a drastic measure, thanks, in this case, to the good personal relationship between Fox and Rossi):

At this point, if Rossi is a smart fellow, he takes up the challenge and doesn’t waste any more time, except for a drop to a bar nearby, together with Fox, just to celebrate the agreement with few (understatement) glasses of good wine …

Problems: the severance payment could be very costly, if the guy doesn’t like the idea, not to mention possible physical reactions!

But do you know which is the major problem with this method?

The major obstacle with the application of the “brutal” method

Listen to the boss’ wife, Mrs. Harpy (who, as her homologues, is in charge of cash):

“Fox, what the f… are you talking about (she is not the best in terms of elegance!), how can we pay the agents a 15% commission? Can you imagine what would happen to our margin?

At this point, if Fox didn’t have the right information on variable costs, he would go off with his tail between his legs.

(By the way, most companies, and not just the smallest ones, don’t give this type of information even to Sales Directors, either because their information system is leaking everywhere or, even worse, because they do it on purpose!).

Anyway, not for nothing Fox’s name is Fox!

Quiz: how much is, in percentage points, his company’s current (first) contribution margin?

Assuming that you can figure it out, I bet it’s not too far from your company’s rate.

Not just that: beyond the fact that the increase in sales is one of the prerequisites for the application of the 15% commission rate, since another condition requires that at least 40% of product X will be sold, it is likely that the average contribution margin will improve, allowing an even smaller increase in sales to break-even with the previous situation.

Not to mention that it’s practically impossible that all the agents who will accept the new conditions will be able to totally comply with the above prerequisites: in practice, we will have an average commission rate that won’t be too far away from the previous one, with the advantage of having shaken the sales organization and collected, although here and there, some relevant information on a number of clients.

What happened, in the meantime, to our balls-breaker?

It was a while that we couldn’t hear his objections. Here is another one:

This time I really think that this ineffable guy didn’t understand anything.

We won’t even reply, but we agree that a pure and simple application of this last method would really be a little “brutal”: ideally, we should attempt to adequately balance a strong incentive system with periodic management education sessions (“vaseline approach”) that would continuously improve the quality of our sales partners, helping them at intelligently interact with clients and the company’s management, also in their own interest.

In any case, in addition to one or more competent and authoritative “Foxes”, any company needs an adequate marketing information system, well-tuned with the reward policies, not an easy task: what if everything translates, at the end of the day, into an increase in marketing and sales costs (it looks like a final objection)?

Who said that the pertinent and reliable information is free? And, most of all, did we/you consider the opportunity costs of irrelevant, incomplete, and inaccurate information, i.e., the missed huge opportunities due to the impossibility of correctly piloting our companies?

By the way, this is the fourth of a series of 8 post that, in my intention and in those of my friends and colleagues Alfonso Pace and Virgilio Gay (they wrote on the same subjects, and you can find their versions, in Italian, at https://medium.com/marketing-mindset) should have – and still should – anticipate the new edition of the now elderly text, currently out of print, reminded in this photo.