Are we Missing the Benefits of Market Orientation?

Are we Missing the Benefits of Market Orientation?

A new body of best practices to fully exploit these benefits.

We are in an era of growing customer centricity, facilitated by the constant development of information and telecommunication technologies, that are changing the balance of power between suppliers and clients in favor of the latter.

Clients are much better informed about the possible alternatives that could satisfy their needs, and, thanks particularly to social media, have an increasing say in influencing the reputation of suppliers and determining their success or failure.

However, most companies and institutions, both profit and non-profit, public and private, large and small, are still unable and unprepared to adapt to these changes, and do not even realize the importance and urgence of becoming more market oriented than in the past, when their lack of market orientation was relatively protected by the little transparency of market relationships and their consequent position of strength as suppliers.

But what does it mean, in practice, to be market oriented?

There are several theoretical definitions of market orientation in the academic and managerial literature, but very few guidelines on how to actually put it into practice, and these guidelines have not yet taken the form of a sufficiently comprehensive set of strategic and operational directions.

On the other hand, we had been looking at catalogs of norms produced by international, European and some national standardization bodies such as ISO (international), CEN (European), UNI for Italy, DIN for Germany, BSI for the United Kingdom, AFNOR for France, UNE for Spain, and ANSI for the United States: in addition to myriads of technical norms about everything, there are also many norms and best practices about behavioral, deontological, organizational, social and service issues, such as social responsibility, sustainability, working environment and management systems, but virtually none on marketing related guidelines, with the exception of a few on branding and market research.

Strongly convinced of the relevance of a market orientation and of an appropriate marketing minset for the entire economy and society, more than one year ago we therefore decided to launch, on behalf of UNI, the Italian standardization body, our client at that time, and AISM, our Italian Association for Marketing Development, the conception and creation of a so-called “body of best practices” on “market orientation”, defined as follows:

“Corporate philosophy and conscious and explicit will of any organization and its members to create value for itself and the market, in an institutionalized manner and in view of a continuous improvement, through the identification, interpretation, potential anticipation and fulfillment of market’s needs and expectations, involving it whenever possible in the co-creation of value, within the framework of the ethical and deontological principles that characterize our culture, and contributing to the improvement of our countries’ socio-economic climate, with positive spillover effects from political and institutional perspectives as well”.

Focused on customer centricity and value creation, the document that covers this body of best practices and guidelines on market orientation is addressed to any type of organization: companies, institutions, associations, in whatever sector of activity they operate and without distinction in terms of size, seniority in the market, public or private nature, profit or non-profit objectives.

The main focus is articulated in a number of principles, summarized in the following figure. 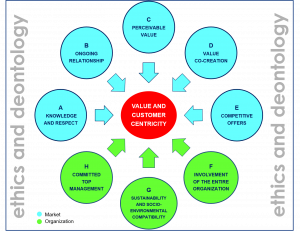 The discussion of principles is followed by a detailed description and selected guidelines about the various types of activities (analytical, strategic, and operational) that are needed to implement the principles, as well as by a description of the organizational functions and roles that are in charge of performing those activities.

Finally, a set of Key Performance Indicators for measuring and controlling the degree of market orientation of the organization is provided, together with a 50-item glossary that complements the explanation of the various concepts.

The benefits of market orientation

Since the fifties of last century, the marketing, management, and academic literature has dealt with the topic of market orientation, although in a rather partial and disordered manner, proposing various ways of measuring that orientation and its effects.

There is, however, substantial agreement on a large part of the principles we discussed above and, particularly, many research findings show that high degrees of market orientation, measured with appropriate scales by the different authors, are positively correlated to a number of significant benefits, summarized in the following figure. 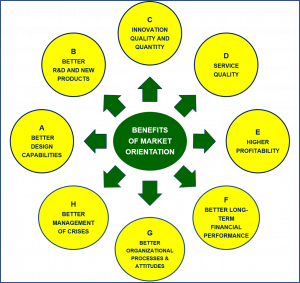 Especially if the implementation of a true market orientation is facilitated by the adoption of adequate marketing planning processes, the advantages of which are detailed in one of the appendices mentioned above, the relevance and quality of the benefits summarized in this figure suggest, in our view, the usefulness of a preliminary checkup of the degree of market orientation of any organization interested in exploiting them, in view of the identification of the areas that deserve more in-depth analyses.

We are currently in touch with a number of institutions that are willing to test the approach briefly described in this article, in view of becoming the first “official” worldwide examples of best practice in market orientation.